The cinereous colored halls of the labyrinth are 10 feet wide and barrel vaulted. The walls are irregularly geometric stone bricks that fit together so well that one cannot wedge anything between them. The thinnest walls are still about two feet of load bearing stone.

Doors are verdigrised, bronze and very heavy. Ornamented with sculpted panels of astrological symbology. They are on well-engineered hinges but should still be considered “stuck” due to their antiquity. Secret doors blend into the wall perfectly and never get stuck. 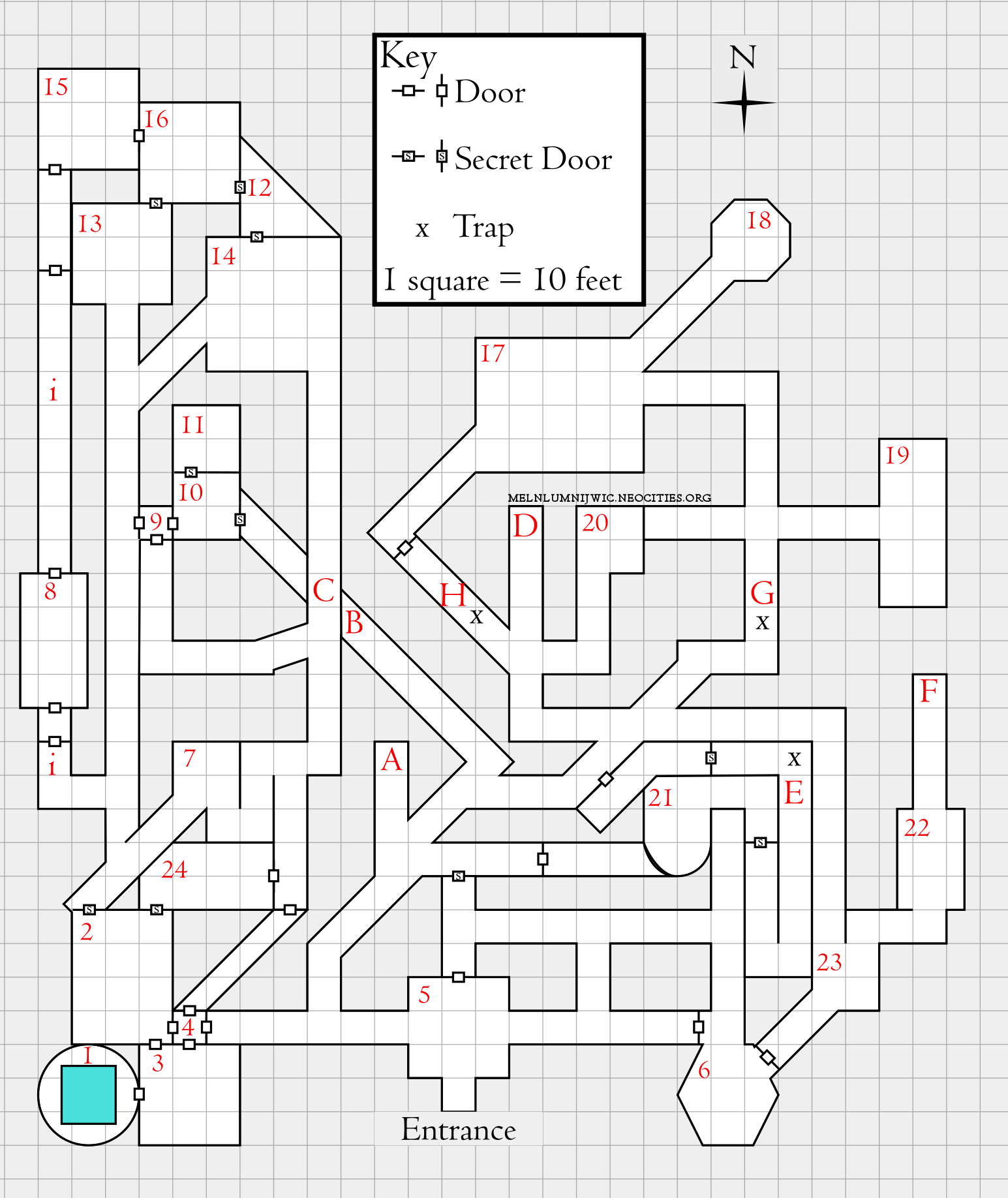 1: 30 Baboons relaxing, grooming in a hot spring. Steamy dome ceiling. A 10 foot marble statue of a naiad holds a glossy red and blue earthenware jug (a Jug of Eternal Boiling) over the pool, slowly pouring perfectly heated water that never runs out. The bottom of the pool has 500 platinum coins scattered underfoot.

2: High barrel vault and 4 gargoyles. Two crouch high on the north wall, two on the south wall. In the center of the room a circular wood platform painted in a black and yellow spiral is spinning. On the edges of the circle four dark iron statues of smug dancing devils. Over the platform there is gemstone-like twinkling. This is from a monofilament adamantine wire (two 20 foot strands, worth 1000 gp each) drawn taut between the statues. The platform is spinning fast enough that anyone who stands still on it for a combat round faces bisection (save vs. death to drop flat and survive).

3: Groin vaulted with squat Doric columns. Someone has scrawled “BEWARE BABOONS” on the west door with a soapstone. A mosaic of a triumphant cavalryman has gems for eyes each worth 500gp.

4: Empty, one door on each wall. They all swing open into this room clockwise and can block other doors. The door jams are decorated with a grim stone reliefs. North with salamanders, east with sylphs, south with undines, west with gnomes.

5: Empty. High vault and one door to the north, with archways leading east and west.

7. Empty. Groin vaults and walls are plastered over with a fresco. It is a nature mural that depicts the evolution of life on this planet (moving east to west).

8. Halfway down the room, embedded in the walls and ceiling is a contorted statue of a giant. Most of his body on the vaulted ceiling, head and hands west, feet east. The open mouth echoes “I shall double your gold! Feed me!” The statue will double the first batch (up to a thousand GP) but swallow any subsequent amounts. Gold lost in this way is irretrievable, as it is instantly laundered to the architect’s astral banking account.

9. A gold, gem encrusted idol of Tiamat enshrined in the north wall. A Lurker Above drops on any group that makes to grab the statue, but allows anyone else to move freely through the room.

10. Centered in the room is a dais wrapped around with stone carvings of prehistoric ferns and proto-kobolds. Lying on this dais heals anyone fully. It takes one full cycling of the moon(s) before the dais can heal again.

12. A half-completed frieze on the long wall depicts a war between giants and dragons. A column in the corner holds a horn (Horn of Blasting)

13. Empty. Purple dust in the west corners rises into a harmless cloud when disturbed.

15. An odd shrine bizarre machine will augment a weapon you provide onto you and give you a faulty combat overdrive system. These cyborg parts allow their host to go into OVERDRIVE and make cool robot noises and gain +2 to hit against humanoids and dinosauroids for 1d6 rounds, but he must attack the nearest target of either type for the same amount of time. After doing this the user takes 2d6 non-lethal damage.

17. Five painted marble dragon heads (of Tiamat) that breathe fire at anyone who disturbs the following and a folding Pentych worth 50,000 gp and an evil obsidian hurdy-gurdy the size of a pipe organ that plays evil music automatically if the heads activate which calls forth Snarlhorn from room 18 who arrives charging in just one round.

18. Snarlhorn’s room. Priceless healer-robot can fix up one person a day, as regenerate spell or cure wounds spell. New tapestries by a newly recognized genius depict alien landscapes in shimmery colors on 7 walls, worth 300 gp a piece (multiply by ten if the artist is found and killed). 120 blasphemous vinyl dinosaur figures (worth 1 silver each to buyers with 8+ INT, or 1 gold to buyers with 7 or less) stacked along northeast wall.

19. Cyclops skeleton chained in the north wall. Living cyclops chained south. Cloth of gold raiment on both worth 15000 gp.

20. Empty but for rotting untouched food from a dozen decadent feasts, topped by a flammable pile of cardboard and plastic packaging for “Dino-Pawp Funk figures.”

21. A great decadent feast in a spire of ice. The ceiling is vaulted and a chandelier worth 10,000 gp dangles over the spire. Encased in ice a Bullywug master chef and his 6 servants, all under geasa to prepare a feast every day forever. Bullywugs can easily survive being frozen in ice, and will have to go back to serving food here if freed. An earthenware jug, glossy cyan and blue is balanced at the top of this glacier (Jug of Supercooled water).

22. Four rotting elves with their heads in a cauldron that is hanging from the ceiling. They and their now destroyed gear were dunked into a boiling electrum and gemstone soup (melted treasure they attempted to steal from this dungeon). The solidified elfectrum is now worth 3,000 gp if you can get it out. They also each have an elven rope, tunic, and tights.

23. Non-hidden door cannot be opened from this side. Secret door is obvious from this side. Decorated with beanbag chairs, lava lamps, and shag carpets, and grateful dead tapestries on the walls. 7 cultists who dash out the secret door to be defended by the gargoyles in room 2

A. This is a dead end but the wall is cleverly plastered and painted to look like it continues on. Anyone running in this direction must roll a save or take 1d4 damage to the face.

B. This hall goes under C. The ceiling droops a little in that spot.

C. The ends of this hall have staircases. It is raised to fit over B.

D. The end of this hall is coated in a super black pigment. It absorbs all light looks like void.

E. A floor tile at the center of spot X has a Magic Mouth cast on it. It will tell all adventurers to “turn back! There is no treasure deeper down this hallway!”

F. The end of this hallway is collapsed stone, visibly melted by a turbolaser.

G. The X here is a pit trap that drops 6 feet into punji sticks. Visible by a wide “X” shaped floor tile. 2D4 damage and save vs. poison. Characters who fail this save will not be able to heal naturally for a week.

H. The ceiling has a wide “X” shaped crossing in the vault. It casts a harmless (but vision obscuring!) pea green fog cloud when things pass under it. Chances of a random encounter are twice as high in this hallway.