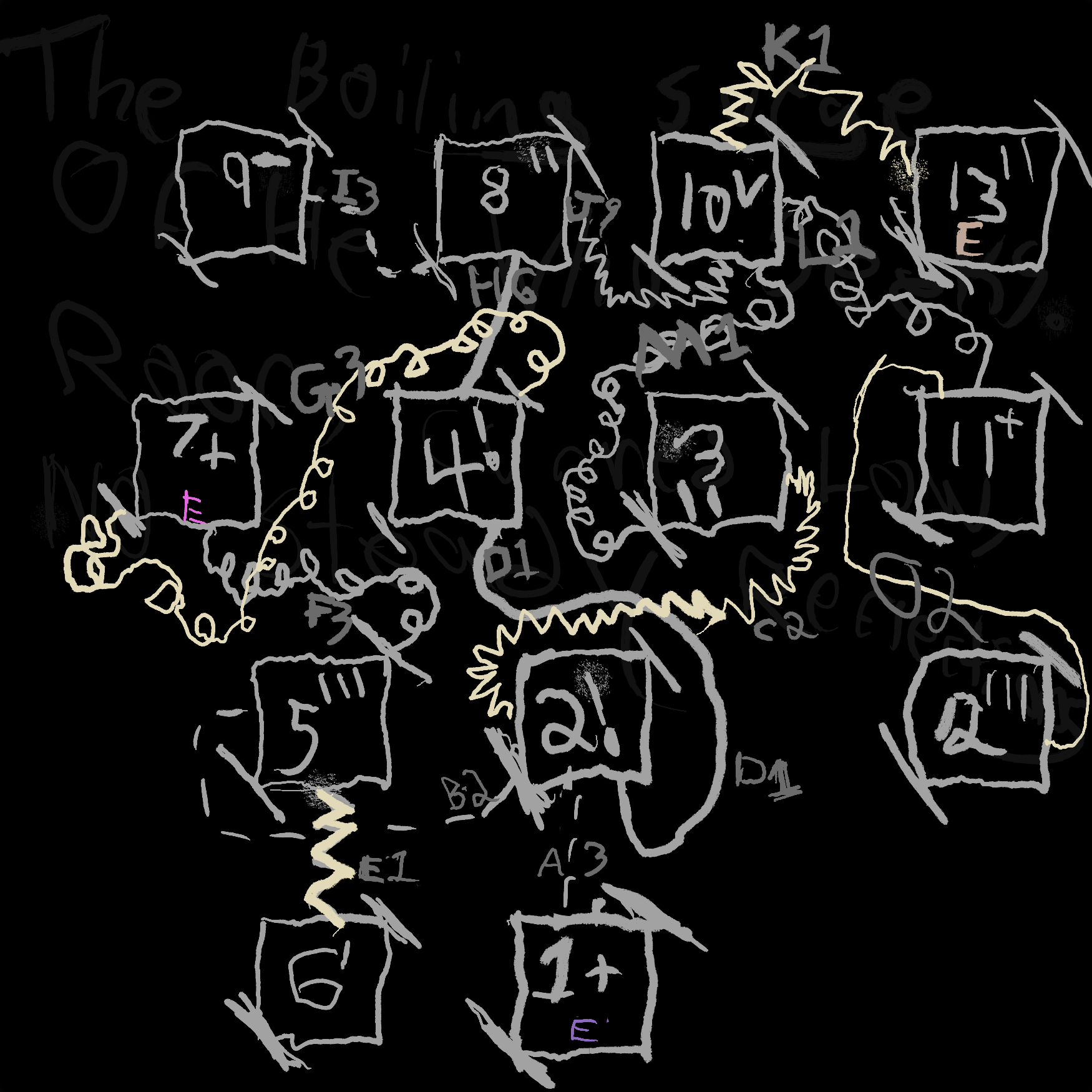 This is what a cave system made for playing Veins of the Earth looks like I guess. I have no regrets. This ran pretty well actually but I don't think it's because of the presentation. To make things more confusing this was written for a heavily homebrewed Forbidden Lands campaign. I don't remember why it's all out of order. Game was in silver standard but I still regret that the treasure here is sadistically worthless. I'm sorry.

THE BOILING SURGE OF HE WHO SEEKS

FRAME 1. SIZE OF HOUSE. ENTRANCE TO BLACKSTONE. ENTRANCE TO SHADOWFELL PORTAL.
A tangle of volcanic caves. Thankfully lava tubes make caves which are easy to follow. Wide but the cieling is claustrophobic. A natural tunnel misaligned in one direction and heading straight down in the other. A 3.5' hole to the north smells like guano and enters A3, a crawl. A 7' hole straight down is the path to the lower underdark. A tight squeeze leads to a room with a desk and a portal to the Shadowfell.

TUNNEL A, LENGTH 3 TURNS.
A straightforward crawl, coated with guano from about 2/3rds of the way up. Nasty.

FRAME 2. GARGANTUAN. D1 SOUTH. A3 SOUTH. C2 EAST. B2 DOWN.
This cave has a pillar curved from the floor to the wall, or vice versa because in certain zones gravity is relative. Subsurface bats roost here. It is possible to walk along every cave surface. . Less tubular. Paragravity caused the flow to spread out in a sphere.

From the cieling an effigy is standing/hanging in a pool of water. At the top there is a grotesuqe lizard's face (mask worth 26 silver), glinting with silver. Putting weight on the totem will immediately cause it to start falling to true gravity, and the water pool to grow and stink. Quickly it falls into the true bottom of the cave, and a sacred stinkseep empties out into this room from above. Thousands of rancid calories preserved by savage gods, worth infinitely more than silver to the desperate.

TUNNEL B, LENGTH 2 TURNS.
Another crawl. This one stinks more. It stinks like blood. From the entrance you can hear scraping scraping scraping scraping and with (scout) you know it's bone on stone and cracking and wheezing. Smells like soot, ash, chalk, oil, kosmoline, burned bone, maintaining your equipment downwind of your warcrimes on a breezy autumn day. All from DOWN THAT TUNNEL. There is a CALCINATED CANCER BEAR about halfway down. Fighting a bear in a crawl is rough. You are single-file, a CRAMPED zone (-2 with heavy weapons and no swinging AND YOU'RE PRONE). It wants to be left alone, but it also wants fire to ease its pain.

FRAME 5. SIZE OF THREE ROOMS. UP TO F3(6). SOUTH TO E1. WEST TO B2.
3 Troglodytes are preparing a trap for the cavebear, setting up a bonfire. They're arguing. They are not likeley to start the fire without help.

TUNNEL G. 3 TURNS. SPECIAL.
This tunnel goes almost straight down, a thirty minute descent. Or less than three seconds if you just fall. You can spiderclimb down, if you have the endurance.

TUNNEL F. 3 TURNS. SPECIAL.
Imagine an underground cliff. That's this, and you have to go along it.

TUNNEL E. 1 TURN. SQUEEZE.
You gotta go on your belly and worm through. It's only a ten minute stretch though!

FRAME 6. SIZE OF ONE ROOM.
7 silver in a chest. A tiefling skeleton, lovingly arranged. A decades old Isndari flag tied to a pillar.

FRAME 7. SIZE OF A HOUSE.
The Troglodyte Crsytal Shaman Pollorafta and her 6 skeleton servants. Hates the mextish, but will listen to reason. In fact demands an audience with Margrave Thrasher.
A purple rope hangs from a hole in the cieling. Bats fly in and out. Mushrooms grow in this room.

FRAME 4. GARGANTUAN. H6 NORTH. D1 SOUTH. G3(6) UP.
More messed up gravity. There's arranged bones of troglodytes all over the place here. A reptillian ossuary. The shiny metal animated skeleton of a drow is wandering in circles and screaming in its own language.

TUNNEL D. 1 TURN. EASY.
Winding and fucky with gravity. There's a barrel roll which looks hard but you can just walk normally along the floor.

TUNNEL M. 1 TURNS. LETTERBOX SQUEEZE.
A narrow crack you can barely squeeze yourself through sideways. Bet you wish you were a goblin.
FRAME 8. SIZE OF TWO ROOMS.
2 Troglodytes. Filled with a wall-to-wall semicircle of rotting meat. Bear traps are scattered in the meat, well-hidden. The center of the circle is empty, and the bones of a giant lay in front of a completed but unfinished clay and cedar idol of Tiamat in the cubist style worth 9 gold. Heavy item.

FRAME 9. SMALLER THAN A ROOM.
The dwelling place of a golbin named Blat Ipswitch carrying 14 sp.

FRAME 10. SIZE OF FIVE ROOMS.
A massive chamber with a column in the center. There's a pile of fresh bones against a pillar. 1-3 humanoid skeletons, and one is surely a Tiefling. Stinking bone. Scraps of old clothes scattered. Gruesomely musty, like a damp graveyard. This is a more typical blackstone cave, forests of pillars and stalactites and stalagmites with clearings of a strangely layered jetblack stone.

FRAME 11. SIZE OF A HOUSE.
The ghouls have been rooming here. Horrid tapestries of rotten cloth of staircase labyrinths and infernal men pushing boulders up endless loops. 9 tapestries for nine hells worth 4 sp each.

FRAME 12. SIZE OF 3 ROOMS. MACHINES CHAMBER
This is the place the MACHINEs are. The Dual-Chronometer and an ancient Flesh Shaper. Roped off by the Troglodytes. Torn old fashioned farwestian clothes piled by it. By plugging into the machine one can become HE WHO SEEKS. The setup takes 1d6 turns. The transformation takes seconds. Your consciousness will be obliterated, you won't need it anymore. A fate worse than death.
The Dual-Chronometer is a Heavy item. Two clocks in brass, with odd markings instead of numbers. Quietly ticking.

FRAME 13. SIZE OF 2 ROOMS.
A carved stairway up. Leads to Castle Zo'am

TUNNEL I
A “chimney”. You could crawl through it, but it’s mostly uphill. About halfway through a copper detailed Palanquin (weight 4 value 150 gold) is wedged in.

TUNNEL J
A squeeze. A ghoul named Beol is here and his brains are hainging out of his skull.

Tunnel K
A squeeze. Drafty and guano-ridden.
TUNNEL L
Waterlogged with a trio of deep mermaids combing their hair. They will ignore you unless you get within drowning distance. That’s when they try to drown you.

Troglodytes respect He Who Seeks, believe their faith will protect them. The sick would come here to die, as diseased meat is no use to the tribe. A troglodyte shaman readies the souls for the next life. She has used the ADAPTATION MACHINE to survive in an environment dominated by He-Who-Seeks. The procedure has turned the shaman into a stone elemental, a walking lizard shaped crystal.

He Who Seeks first attacks in Frame 2. If he uses his fadeout ability and has taken damage in that fight he becomes the wandering monster.

He Who Seeks was an imperial secret agent named Handel who was investigating a Duergar super-soldier project years ago. He used a flesh shaper machine to gain perfect cave adaptation. It's here.